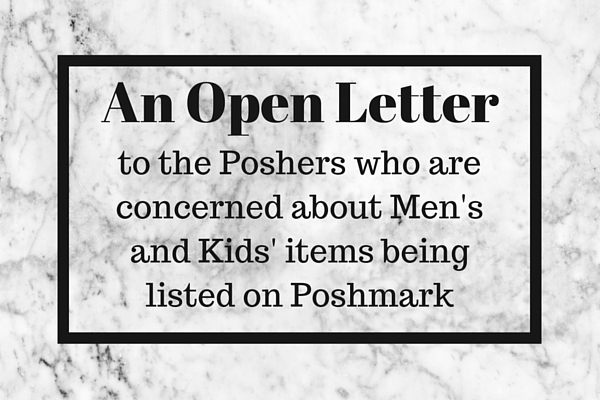 Many of us have recently found out that Poshmark quietly updated their FAQ’s.  They now state that women’s, men’s and kids’ apparel are all allowed on Poshmark’s marketplace.

And I’ve seen many Poshers very unhappy about that.

There are a number of concerns being expressed on several social media networks as well as in the Poshmark app itself.

And I would like to address a couple of them.

The marketplace will be too cluttered

I don’t need to be seeing Size 2 tops.  There’s no way I could fit in them and I don’t want to buy them.

And I don’t care to buy makeup on Poshmark.  So I just don’t browse or search that category.

And that’s the beauty of filters.  We can search and browse listings by as broad or as narrow a scope as we choose.

To be fair to those who are concerned, Poshmark has not yet released any actual new features for listing men’s and kids’ clothing.  Or to sort and search for them.

But that’s coming.  Poshmark wrote in one of their Facebook comments that they have updated their policies in preparation for these new features.

If not, then that is a valid issue.  But let’s hope it won’t be.

I will no longer feel safe

A lot of the concern I have heard is about giving out your address.  And several ladies have said that they don’t want men to be able to get their personal address.

Come on guys.  Let’s think about this one.

You already have to provide a valid address to have a shipping label generated.

And just because men’s clothes couldn’t be listed on Poshmark, that doesn’t mean that men haven’t been using it for quite some time.

I know of several men who have been selling ladies clothes or jewelry on Poshmark for more than a year.  One of them gets brand name jewelry from a local liquidator and sells it as his side business.

I have personally made multiple sales to men.  I follow the rules and only list women’s items in my closet.

Any reason.  I don’t really care.  It was a sale and I made money.

And I wasn’t murdered.

Men have been using Poshmark since it started.  They just weren’t allowed to list men’s clothes until just now.

And the founder of the whole company is a man!!

If you sell on eBay, Craigslist, or local Facebook buy/sell groups, then you potentially have to provide your address to both men and women.

And even if you make a sale to a woman, any number of postal workers along the delivery route can see the address on the box.  And there is no guarantee that they will all be men or women.

And to be honest, the majority of us have our address publicly available online anyways.

Bad things can happen.  Yes.  But I don’t think this is the trigger that will turn Poshmark into a shady, unsafe haven for crime and creepiness.

People just want to make a buck from their barely worn Nike shoes.  Or whatever.

And finally, women can be just as creepy as men.

If you are ever uncomfortable in going through with a sale, you can cancel it.  And then the buyer will never see your address.

Now instead of complaining about a flood of new users, let’s welcome them and help them understand the rules.  There’s enough room and enough opportunity in Poshmark land for all of us.

I think this expansion is great!  Poshmark is my favorite place to sell my clothes and I am excited that men now have the opportunity to sell their own clothes here too.

I’ve literally been telling my husband for 2 years to not throw his unwanted clothes out.  Because I was convinced this was coming.

I am thankful to Poshmark.  They have been dropping hints in media interviews about allowing men’s items for years.

It takes a lot of work for them to make such big changes.  It involves engineering, design, their legal department, and many more roles.  Thank you to all of the employees who contributed to this feature getting to launch.

It makes sense for them as a company too.  They are potentially doubling their user base, which will make them more money.

And they only make money through the app when we make money.  So it helps all of us.

I know that big changes tend to make a lot of people uneasy.

(Just think how crazy it will be if Poshmark ever goes global!?!)

But this is an opportunity.  And we can choose to use it or to get angry and complain about it.  Which of those leads to dollars in your pocket?

What are your thoughts on the new feature?  Positive or negative?

What are you hoping the app will look like when the new feature is actually rolled out?

Feel free to share your thoughts in the comments below.